Uncharted 4 – “The Malaysia Job”: A Horribly Boring Time, A Grand Achievement in Narrative

The ‘Uncharted’ series has always been known for two things: high-octane thrills set in exotic locales, and excellent characters and narrative. Facing impossible odds, Nathan Drake and company have always come out on top. They’ve grown, changed, fought villains (as well as each other) and built strong bonds in 4 separate adventures spanning nearly a decade. With developer Naughty Dog’s latest salvo, the bar has been raised even higher with some of the wildest moments in the series, wrapped up with a fitting end to the story of treasure seeker Nathan Drake and his merry band.

After an explosive (and origin-y) first 2 missions of the game, Uncharted 4 does something incredibly interesting and powerful. Chapter 3: ‘The Malaysia Job’ is arguably the most boring mission in the entire series, yet twists player expectation and lack of information into an incredible achievement in video game narrative.

As the mission starts we are warned that 15 years have passed. Questions begin in our minds. What has Drake been doing these 15 years between the prison escape where he lost his brother and today? Are we about to see a new adventure from his past that we haven’t seen before? Will it shed light on the events of the first two chapters, or maybe even chapters from previous games?

The gameplay then starts, like all other chapters in the game, with a cursive script at the top of the screen. The title ‘The Malaysia Job’ is slowly written across it. The screen slowly fades from black which turns out to be a large school of fish slowly swimming away from the camera.  An underwater Drake in scuba gear is revealed. Having been to dozens of tropical locales (and the fact that Malaysia’s borders are 80% water) leads the player to assume they are in Malaysia, presumably seeking out underwater treasure. So far so good.

A serious, disembodied voice warns of Drake’s dwindling reserves of oxygen. The indication of danger delivered through an earpiece or a walkie-talkie of some kind is a hallmark of the Uncharted series. Everything so far is pointing to a nail biting mission, like so many in the series. It’s also the first underwater section of the game (obviously very cool) and there are hopes that we might eventually meet a new and interesting character who is talking to us through our radio. 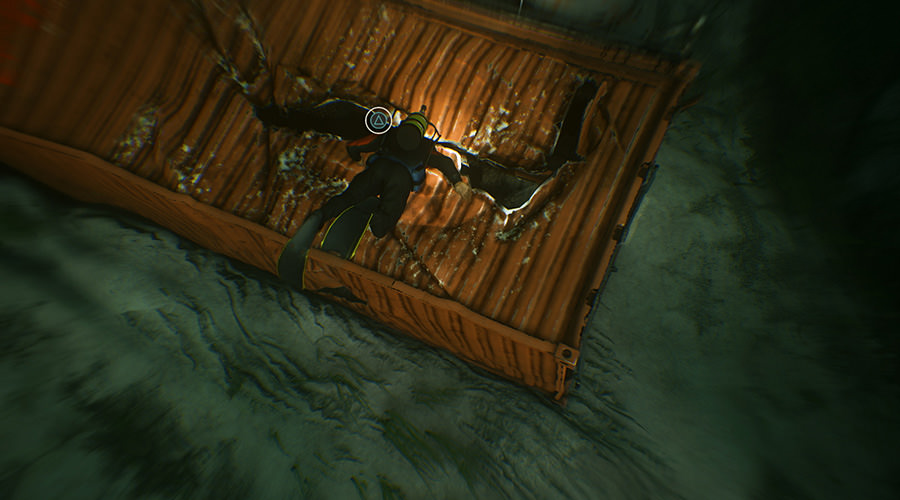 The pangs of confusion and boredom start to creep in very, very slowly. The first moments are when the cargo container is revealed. It is strangely out of place for the Uncharted series. It is simply a metal shipping box that you would see on any train since 1970 in the country. A tear in the upwards facing side is the only difference of note. “Shouldn’t it be a centuries old, moss covered wooden chest?” I thought to myself. I threw these doubts aside almost instantly, but they somehow stayed in the dark recesses of my mind like an itch I couldn’t scratch.

The unknown voice commands Drake to find the cargo, some of which has been scattered around what you’re maybe not so sure is the ocean floor anymore. Visually, there is really nothing in the water indicating that it’s not the ocean, but doubts are creeping in. Finding cargo isn’t a strange request, but what the cargo looks like is – simple, unblemished, modern wooden crates. What? Additionally, the cargo is very near to the wrecked container – hardly a brain-teasing (or fun) puzzle that the Uncharted series is known for. Seemingly placed near the container on purpose, like some kind of underwater tutorial preparing the player for longer and tougher puzzles later on. My internal critic, although racing through possibilities, was quieted as I found the remaining crate and boringly hooked up the metal container to winches from above water. “There must be more to this mission” I thought to myself as the disembodied voice asks Drake if he needs a lift up to the surface.

As the light begins to overtake the screen my imagination raced to what would be above: a recently discovered pirate ship in the middle of a swampy lagoon with Scully and Elena inside, ready to sail away? A grizzled, ambushing gang waiting to take me out and steal the treasure I had just unearthed? Maybe even a double crossing from the disembodied voice? Who knew? But I knew I really wanted to find out.

As the container left the water my disappointment was palpable. In full view is an ugly, metal bridge covering a small, dirty river and a nondescript, presumably American town in the distance. Where was the excitement? Where was the intrigue? Why the hell did I just spend the last 10 minutes in the water exploring a nasty river seeking (what turns out to be) a very un-Drake treasure? He then says “I’m gonna smell like fish for a week”. I somehow felt like I smelt rotten fish right then and there. I was utterly baffled. The Uncharted series had never done this before. I felt like Naughty Dog had really dropped the ball. 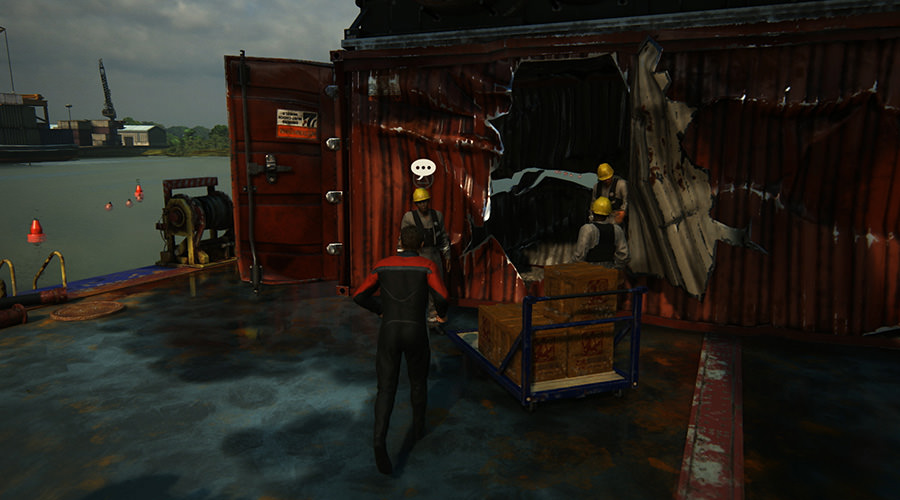 I remained confused for a few minutes. Then as Drake speaks with the foreman of the barge (who turns out to be the disembodied voice), the meaning and strength of the mission revealed itself.

By putting us in Drake’s shoes and making us feel, or more appropriately, live the boredom and futility of his life as a retired adventure seeker, the dev team has created a stronger emotional moment than any other in the series. As players, we have guided Drake through some crazy adventures. He has travelled to Shambhala, discovered secrets in far flung countries, and cheated death more times than is possible to remember. Now our hero is essentially cleaning up garbage for a paycheck? A larger contrast I could not think of.

At that moment I got to really, truly know Drake’s character. Even through all of the ups and downs of 4 games and watching (what we thought at the time) was his brother dying not moments before, nothing holds a candle to this chapter for me. By making it last for several minutes and forcing the player to really endure that boredom was the only way to convey that connection, and those feelings, in a true and powerful way. If this had been a cut-scene of his disappointment, it would not have had half of the emotional weight that it currently has. Kudos to the creative leads at Naughty Dog for not cutting this mission from the game, which I would wager was rated quite low in playtests.

‘Show don’t tell’ is a trite but powerful phrase in the creation of entertainment. This mission the absolute perfect embodiment of this phrase.
Excellent narrative is not all about pomp and circumstance. It is simply about making your audience feel something real and connect with strong characters. This mission is one of the greatest examples of that in any video game.