I still feel bad about not playing it when it was released about a year ago. I didn’t own a PS4 at the time (send me your hate mail. Preferably snail mail. I miss getting it… *sniff*). It has recently been released as a free title for February 2016 if you are a Playstation Plus subscriber.

Kevin and I have been playing it ever since. And I say ‘we’ve’ because this is a game you really want to play with a friend. It begs to be played with some kind of voice communication. Knowing what your comrades in arms are (and will) do is crucial to even the most pedestrian missions. With it, hilarity ensues. A certain ‘joie de vivre’ washes over you. Without it, you will turn to the dark side of the force… and maybe be put on suicide watch.

Helldivers knows exactly what it is and does it incredibly well: a friendly fire, top down shooter that has tons of unlocks and randomized missions. It blends traditional coop mechanics (reviving others, strength in numbers) with the constant fear of death from your teammates (and enemies). This tension makes the game one of the exciting indie games i’ve played in awhile. 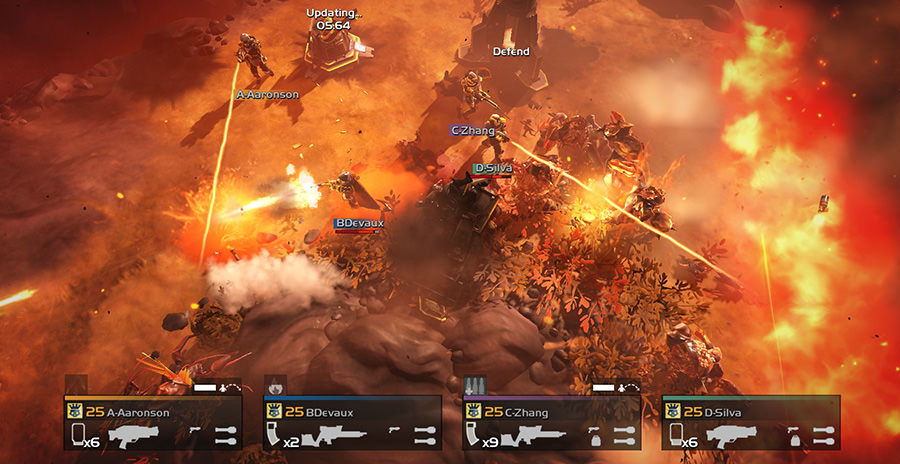 What strikes me the most when I play it however, is how deliberate everything is. Every ‘stratagem’ that you call down (Helldivers’ version of abilities and weapons all rolled into one) requires the player to press multiple direction pad inputs in sequence. This sounds easy on paper, when there’s multiple enemies, bullets flying everywhere and death all around you, it’s anything but.

Ease Of Use Challenges

Developer Arrowhead Game Studios truly understands the power of properly denying the player the ‘ease of use’ mechanics that are baked into most games. This is a tough road to hoe from a dev standpoint. These things usually end up being the least favorite thing in a playtest. It’s also VERY easy to go too far and introduce frustration for the player without enough reward associated with it. It’s obvious that they learned a lot from the fun, but more frustrating Magicka, and applied those learnings here.

In short, a delicious romp of top down goodness that has an evolved sense of coop mechanics. Play it.