Well the title really does say it all. This week Cam (audio designer at Ubisoft Toronto and all around great guy) and I discuss these hot topics with appropriate vim/vigor. We discuss how  each contributes to the fun and immersion of each title inasmuch as this podcast allows.

What is foley? Where did it come from, and who invented it? It’s a recording process invented by Jack Foley in the early days of sound cinema designed to ‘fill out’ the sound that was lacking from just the music score and the voices. From these relatively humble beginnings, it has evolved into a rich, high-fidelity area of sound design that we know today. We could not imagine a movie or game without it. We examine an audio clip from Far Cry Primal and discuss the exciting audio challenges of bringing a game set in 10 000 BCE to life.

We move on to discuss the awesome sound effects of Star Wars Battlefront. Hailed as one of the best sounding games of 2015, Battlefront makes extensive use of the Lucasarts audio archives. This must have been a huge treat for these sound designers (Cam I would have both been excited), but also comes with great responsibility: millions of fans around the world have bought your game in (large) part because of the iconic sound effects; blasters, lightsabers, and laser cannons. Every sound must be pitch perfect and be instantly recognizable from the original (real?) Star Wars trilogy. I learn that the music for the game wasn’t even composed by legendary Star Wars composer John Williams. It sure does sounds like it however. Composer Gordy Haab has recreated Williams iconic style with excellent results. We examine a very recognizable (not from the trilogy – but heavily inspired by the seismic charge from Episode 2) weapon – the thermal imploder. How did the audio team get it to sound this unique? What techniques did they use? Cam breaks it down for us.

We finish off by discussing the music from the 2 latest Assassin’s Creed games: Unity – set during the French Revolution, and Syndicate, set in London during the industrial revolution. We love the scores that are both powerful, but very unique from each other and very reflective of the time period they were written for. We examine the score, specifically during fighting gameplay within each game and compare and contrast how each was used. We also discuss the inspirations for each style, the lengths the audio team went to to get authentic sound, and how these scores inspire, and are inspired by the characters in these titles. 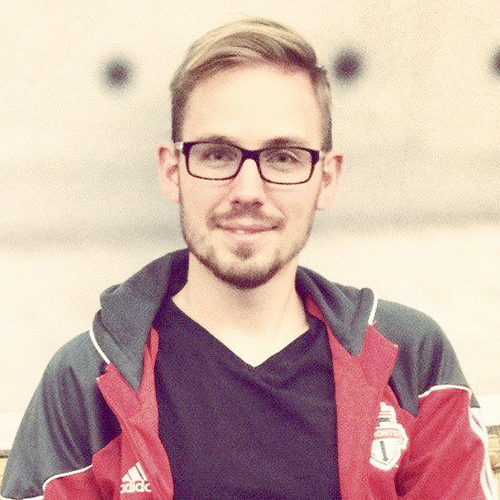 Guest on this podcast: Cameron Britton

Cameron Britton is a sound designer at Ubisoft Toronto, and has worked on some of the company's biggest brands, including Splinter Cell, Assassin's Creed and Far Cry. He also composes, plays music, and teaches Game Audio at the Harris Institute.