Create big value for little cost to your game

Game modifiers are the easiest way to transform your title for as many players as possible. They can create fun where there was frustration. They can entice players to log additional hours for very little development time, and can also create a simple, zany kind of fun.

What are game modifiers? They are player facing choices which provide gameplay adjustments, bonuses, additional challenges or aesthetic additions.

Game modifiers improve the player’s gameplay experience in 2 major ways: they help to solve the problem of ‘challenge’ and they are a cheap way to infuse your game with replayability.

The most obvious example modifier that every gamer is aware of is of course difficulty settings. This allows players of different abilities to enjoy your title. Challenge is a contentious topic in games. As a developer It can be hard to balance content gating, the sense of player accomplishment, and ease of use, but when a player faces a wall in your game where they may simply quit the title forever if they don’t progress, having selectable difficulties feels like a no brainer. If you’re making a roguelike or Dark Souls style game, maybe you want to forgo a player difficulty selection, but think hard about not including it in your game in some capacity.

Some game offer dynamic difficulty that is modulated in some way by the player progression, or how well they are playing. I would suggest still considering selectable difficulties to offer the player more control over their experience.

One of the best things about difficulty settings is their potential for inexpensive cost. Changing a few numbers on a spreadsheet can create an entirely different experience for the player. Big AAA releases may take additional steps to further accentuate the difficulty differences (additional enemies, or types, additional objects, etc), often difficulty systems can be boiled down into simply number tuning. Cheap, easy to change and great for the player. 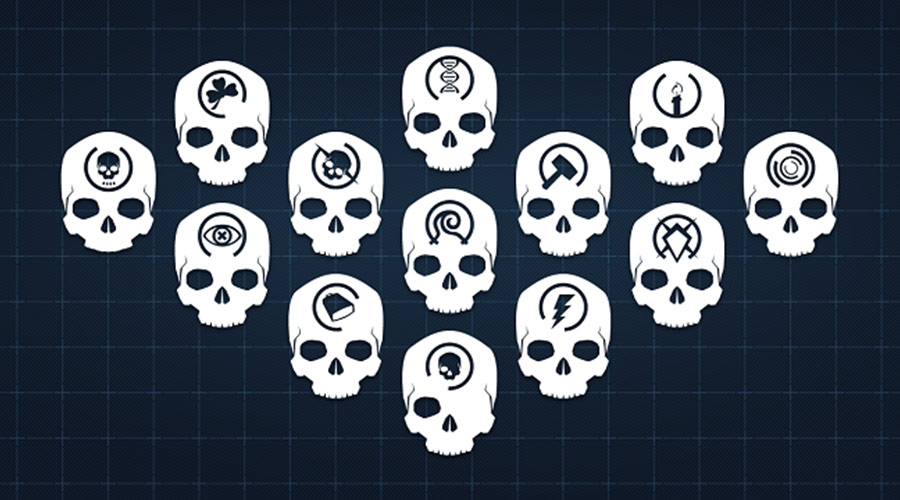 One game that has fully embraced modifiers (and not just difficulty settings) as a game mechanic is the Halo franchise. It’s Skulls (introduced in Halo 2) provide additional, unique challenges for players when switched on. They are an excellent example of modifiers because they they touch so many player inputs, and game outputs.

Scattered across the game’s levels, Skulls need to be found first before they can activated. This challenges a player’s curiosity, their 3 dimensional spatial understanding, and often their mastery over the game’s exploration mechanics (primarily jumping and crouching). Once activated, these Skulls often provide much higher levels of difficulty for the player, (e.g. All NPC’s health is doubled) and additional score multiplier rewards, providing a solid risk/reward incentive. They often challenge the player’s mastery over the base control and shooting mechanics, but also request them to play in a specific style to be successful (e.g. No auto-shield regeneration. Only melee attacks cause shields to recharge). This helps the player understand the depth and value of your core mechanics. If they’re good players will truly appreciate them with modifiers.

The Whimsy of Uncharted 4

Modifiers don’t need to be anything other than a whimsical addition. ‘Big head mode’ has been featured in many games and will continue to fuel our love of all things disproportionate.

Recently, Uncharted 4 has created an impressive list of aesthetic (and gameplay focused additions) that can be combined to hilarious and unique effect.

Modifiers – an amazing return on investment

As game developers we spend a lot of time balancing the game through many different methods for the perfect player experience. Providing the player the tools to modify the experience to their liking can be scary for us, but can provide so much value to the player: they should never be ignored. Especially if your modifiers are damage or health values (of the player’s avatar or NPC enemies) they can be an extremely inexpensive way to achiever a variety of results in your title, appeal to more people who want a different challenge experience, or simply want to explore your title in surprising ways.