Avoiding Pitfalls in Your Crafting System

The Value of Crafting

As games grow and strive for engagement on additional, ‘meta’ levels, crafting has also grown in prominence. It’s easy to see why. Varied crafting recipes with different requirements can create aspirational rewards for players with short, medium, and even long-term engagement goals.

For open-world games and MMO’s, materials located in different areas coax the player to more fully explore the game space, and can provide excellent ‘extrinsic’ rewards for doing so.

Crafting also has the potential to be a great return-on-investment feature, as it essentially ‘reuses’ the environments for an additional purpose, as well as piggybacking off of existing item mechanics: you wouldn’t have crafting in a game where you couldn’t pick up/receive items.

Some games have even defined their experiences through crafting: the obvious “Minecraft” comes to mind, but also games like “Rust”, “The Long Dark, and “Don’t Starve” (amongst many others) have built excellent engagement around relatively simple crafting mechanics.

Crafting: The “127 Hours” of Game Mechanics

On paper, crafting sounds like a no-brainer: a high potential return with low risk. There are pitfalls however. Without designing your system with a clearly defined purpose within your title, crafting can sometimes operate in a tight spot.

If the player decides they can get better, fully completed items by simply exploring and defeating enemies, why should they bother crafting? Conversely, if they can craft items that are better, why be excited about drops?

This is the conundrum that plagues many loot-based games. Depending on the severity, either problem can relegate crafting to an optional frivolity, or even a frustration inducing pariah.

One easy way to give your crafting system a true purpose is to force certain items/bonuses/rewards into the ‘crafting only’ camp. Again, be careful not to make these items simply more powerful than found items as you will ruin your drop/find system. These ‘crafting only’ items should provide some additional experience/value/mechanic other than a bland power increase for the player’s character. The ‘Kanai’s Cube’ mechanic in a patched Diablo 3 is a great example of this. It provides players with interesting bonuses that can only be obtained through this method, making the Cube mechanic essential. 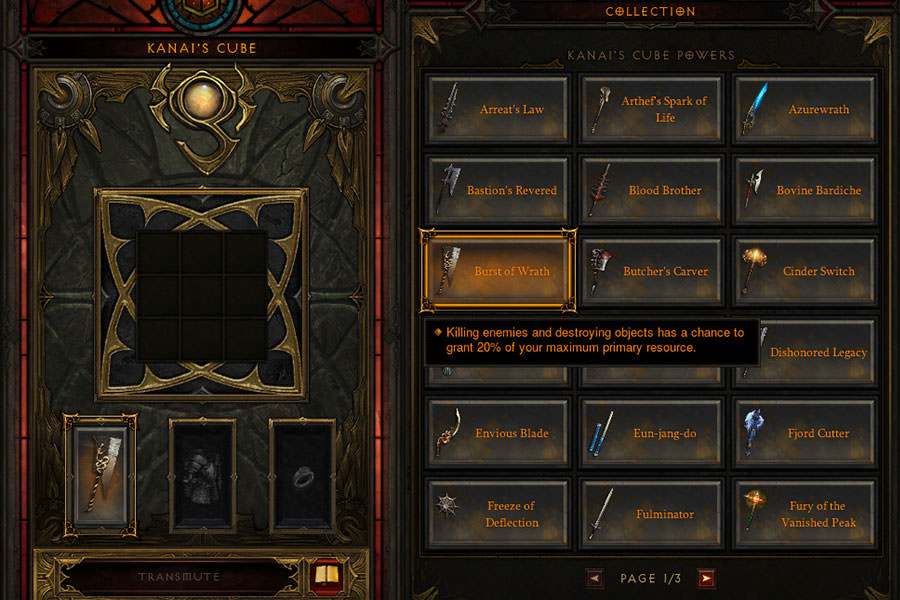 Focus Where you Want Crafting to Exist

Another option is to focus your crafting design on specific areas of the game, at specific difficulties, or at specific times of the player’s life cycle with your title. “The Witcher 3” does a good job of creating a potion crafting system that is optional at lower difficulties, yet becomes essential at higher ones. Although “Skyrim” opens up crafting very early in the game, it really only starts to feel valuable and necessary after several hours of play.

Simply put, it takes effort to deal with a crafting system in any game. First deciding on what to build, then finding and validating materials, checking recipes and building the item is way more complicated than simply finding something on the ground and picking it up. Communicating the value of using the system must be of paramount importance. Tutorials need to be clear, the interface clean and fluid, and what the added bonuses of the crafted item are need to be discernible even at a quick glance.

Recipes: What are They Good for?

Recipes that were once important at a specific stage of the game or character development eventually become useless.They can often end up clogging the crafting UI, now serving no purpose. They may still have value if you feature multiple playable archetypes, each with their own strengths and weaknesses, but if your game does not, make sure your crafting UI is robust enough to handle hiding, or even removing these recipes. Otherwise, all they serve to do is create noise around your system, and also remind players of how weak they used to be – “I can’t believe I actually thought THAT was powerful”. 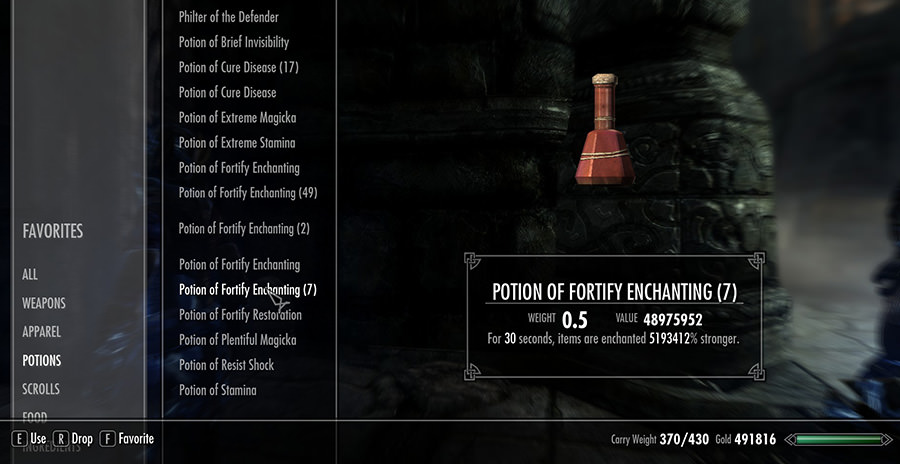 Recipes, recipes as far as the eye can see… also, a REALLY valuable potion

Other options to consider: can the player ‘deconstruct’ recipes into a crafting material of some kind? Can they potentially be traded in for currency? Can they be destroyed in a pyre of sacrifice? This of course depends heavily on your game and the mechanics you’ve chosen, but be sure to have a tight loop here as the system ends up feeling very sloppy without a good solution.

Treading over the same areas again and again to farm materials for your next recipe is simply not fun. Nobody wants to do it. Repeating any game action over and over gives your brain a type of carpal tunnel syndrome. Make sure you have a good plan in place to limit this frustration.

“Destiny” uses several fixed nodes in the world for materials, but randomizes which one will spawn, and when. This keeps players guessing at least a little bit. It also features a nicely balanced material requirement for item upgrades, and quick respawning nodes which allow for optimized ‘material runs’ while completing Patrols. “Tom Clancy’s The Division”, although requiring heaps of materials to craft the highest level items, has at least an in-base material respawn system.

Simply gathering materials by itself smacks of work. Try combining it with existing quests/missions/activities for a ‘layered’ reward approach: gathering materials doesn’t feel like a chore when you’re completing a side mission or getting several of them as drops from a boss kill.

It Depends on Your Game

In some ways, almost all game design principles should be applied to your game with a ‘it depends’ philosophy, but it’s especially true of crafting. The most important thing to remember is that crafting needs to operate in a place of value and importance to the overall game – in your game’s wedding it needs a seat at the head table. If you snub crafting, they will just get drunk and make an awkward inappropriate speech before you need the kick them out. You don’t want to do that.